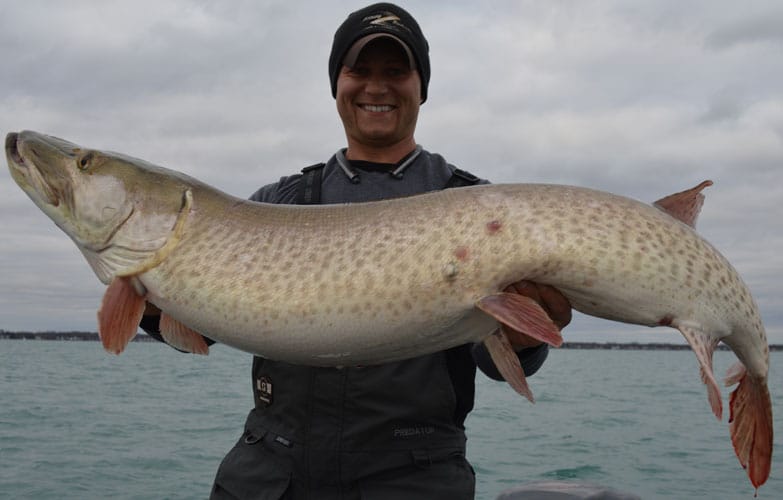 It is true that all fisheries go in cycles with peaks and valleys in the fishing, as well as slight changes in their overall biological makeup. The Musky fishing on Lake St. Clair, on the other hand, is one of those lakes which in the last 60 years has had complete over hauls in the lakes make up, biology and fishing. In 1998 the proverbial bomb shell to the Lake St. Clair Musky fishing hit: Quagga and Zebra mussels where introduced. Both of these mussels are extremely effective filter feeders with very high reproduction rates. Their affect was astonishing. Within a few years the lakes water cleared up dramatically, and the mussels are considered to be one of the largest reasons that Lake St. Clair maintains a visibility which frequently exceeds six foot.

The effects this new cleaner water had on Lake St. Clair musky populations were numerous. First as the water became clearer it allowed for much more sunlight penetration in the water. This in turn allowed weed growth in the lake to skyrocket. In a study conducted by the Ontario Ministry of Natural Resources they show a 500% increase in plant growth from 1978 to 1994. Although another study has, not to my knowledge, been conducted many biologists speculate that since 1994 the weed growth has probably gone up another 500 or so percent due to the increase in water clarity since the first study.

Due to these factors

At Spencer's Angling Adventures, we saw the population of Lake St. Clair musky growing and due to this the Lake St. Clair musky fishing increasing dramatically. However there was one main problem, the girths on the fish that were being caught were a bit less than desired. Although a large number of fish grew to 25-30 pounds, the 40 and 50 pound marks seemed to be outside of the question. This problem had a couple primary causes. First of all was the lakes lack of forage to feed all of the muskies in it. Although Lake St. Clair did have enough forage to keep the musky population fed and relatively healthy, it did not have enough food to keep the fish fed easily. In this period the primary food source of muskies was the Lake St. Clair perch population. Although this population was a good food source for muskies they did have a number of drawbacks when they are the primary forage fish for great lakes muskies. First of all, Lake St. Clair receives a massive amount of perch fishing pressure from anglers. In fact, in the years of 2002 to 2005 the Michigan Department of Natural Resources estimated that about 750,000 Lake St. Clair perch were harvested per year by Michigan anglers alone. Considering that Lake St. Clair is nearly two thirds in Ontario and a similar harvest can be expected from their anglers as well, it is fair to say that a ton of perch are being harvested by perch anglers every year.

The first ever discovered VHS, Viral Hemorrhagic Septicemia, to infect great lakes fish was discovered, a musky from Lake St. Clair. During the mid-2000’s the virus took a tremendous toll on the Lake St. Clair musky population killing as many as 40-50% of the muskies in the system. Although the immediate results on the fishery seemed horrible the virus turned out to be one of the greatest things to have ever happened to Lake St. Clair musky fishing. First of all, as is true with any virus, it is more lethal to fish with a more compromised immune system. Therefore the virus had a much higher mortality rate on fish that were malnourished, sick, weak or otherwise not completely healthy. More or less we saw an extreme example of natural selection thinning out an already over populated, population of Lake St. Clair muskies. As is true with any virus, the first two years after being introduced it had its most lethal effect on the population. Each subsequent year, as more fish became immune to it and the sick and weak fish were killed off, it became much less lethal. By the late 2000’s it had pretty much run its course and the remaining population is mostly immune and therefore not really affected. What the virus did was kill off the weaker members of the musky population in much higher quantities then the healthy fish. This allowed for a huge overall genetic improvement in the Lake St. Clair musky strain, basically leaving us with only the strongest fish left to procreate. Another huge change we have seen over the last ten years is the population of gizzard shad in Lake St. Clair. Although they have always existed in Lake St. Clair, their numbers right now are the highest they have ever been. When the virus hit the lake it greatly reduced the population of the gizzard shads primary predator, muskies. This reduction in predators triggered a gradual increase in the shad population on the lake. However, just as the virus was finishing up its work on reducing the musky population, we had a number of years with exceedingly warm winters. These mild winters (not every winter but a number of them over the last several) have allowed more and more shad to survive the winter. When you let a fish with reproduction rates as high as that of a shad get the ball rolling their numbers explode.

The Ontario Ministry of Natural Resources conducted a survey on the shad population of the south shore of Lake St. Clair and they discovered that the population showed a huge increase over that time. This explosion in the shad population of Lake St. Clair has given the muskies not only another food source, but also a food source which is extremely well suited for growing large fat muskies. Gizzard shad tend to average between 6-12 inches in length and can easily exceed 16 inches. Their very round, or dinner plate body design however makes them more substantial than a leaner fish such as a perch of the same length. In addition, gizzard shad are also fish that are extremely rich in oils and fat making them a very high protein, fattening meal for the Lake St. Clair musky population. When you combine that with the huge numbers that gizzard shad schools usually contain it makes it easy for muskies to catch them with little effort, and you are left with a perfect food source to grow big Lake St. Clair muskies. Combine this greatly increased shad population with the already high perch population, in addition to the number of other less used forage fish such as walleye, white bass, catfish, sheephead, etc. and you determine that Lake St. Clair is perfectly suited to grow GIANT muskies. All of these history factors have lead to Lake St. Clair Musky fishing becoming the trophy fishery it is today. Be sure to come and check out the amazing Musky fishing for yourself!