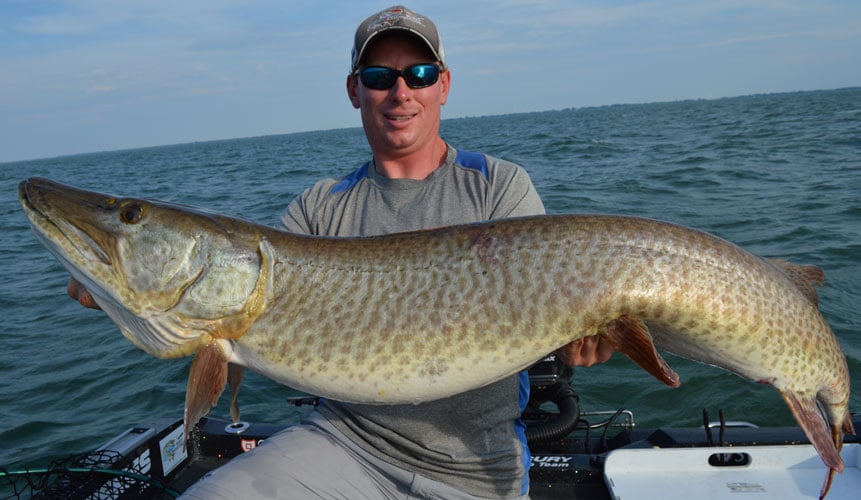 The rather interesting part of casting on Lake St. Clair is that the concept is fairly new. Granted there were a few guys out there casting beyond a decade ago, however for the most part the casting side to Lake St. Clair is pretty new. Despite the new stature, casting anglers have posted up some monster catches. These big fish catches on Lake St. Clair have given casting massive credibility and attention on Lake St. Clair. However, due to the Lakes complete lack of any distinguishable structure, Lake St. Clair casting can appear to be the proverbial needle in a haystack. Despite this, once you get it dialed in, 10 plus fish days are not only achievable, but actually common. Contact Spencer's Angling Adventures in Harrison Township for more information.

To look for when casting Lake St. Clair is the weeds. Lake St. Clair is pretty much completely surrounded with a variety of different weeds. When you are targeting these shallow weeds, less then 7 foot, there are a couple things you need to look for. First of all is cabbage. Lake St. Clair is full of milfoil, grass and cabbage and all of these weeds can hold St. Clair muskies. However, hands down, the cabbage beds hold the most and biggest fish. Normally a good rule of thumb is to go through these weed beds looking for stretches of cabbage in amongst the weeds, either while fishing or just cruising. Put down way points, and then come back to the areas where you have seen good cabbage cast for these Lake St. Clair muskies. Also, it is important to keep in mind that due to the extremely shallow depth of Lake St. Clair, just because you see a weed line between you and shore does not mean there will not be weeds outside of you, or between you and open water. Therefore, always make sure you are looking for additional weed growth on either side of where you are.

The next major structural item

You can target when casting Lake St. Clair is the sand breaks. Although they do not seem all too steep of breaks, generally only 1-2 feet, these sand breaks make up a large contour change in a lake with so little contour to it. In addition, normally on the bottom of the sand breaks you will find a small edge of cabbage. These cabbage edges are almost always loaded with big fish. Luckily for anglers, these sand edges are normally fairly well marked and easy to find on your map or GPS.

To look for when casting for Lake St. Clair muskies is channel edge. Most of you have probably heard how amazing these deep river channel edges are in the fall. However, I am here to tell you that all of these channel edges, primarily the ones in the Detroit River and St. Clair River, hold fish in the summer as well. Once again when fishing these channels be sure to always target areas with good weed edges, preferably cabbage. Also, due to the extremely fast moving current it is often a good idea to try and work baits deeper down the edges. By letting your baits sink down the edge a bit, it will help to get them in front of fish that are lying near the bottom. Normally the fish in these channels have been driven down by the current, so if the fish are off the weed edges this tactic will work great.

For anglers to target when casting Lake St. Clair Muskies is open water. I know that open water on a body of water as large as Lake St. Clair's roughly 270,000 acres seems a slightly impossible task, however it is not. Consider that the two primary forage fish on Lake St. Clair for muskies are shad and perch, species that spend the majority of their adult life in open water. It only makes sense that these open water areas would be key Lake St. Clair casting locations. Normally when I am looking for open water areas I am looking for one of three things: baitfish, weeds, or simply muskies. Side imaging is extremely useful and allows you to see baitfish on either side of you without being over top of them. By using your side imaging you can look for areas on the lake that consistently hold baitfish.

When it comes to Lake St. Clair casting lures there is one major factor to consider. Are you casting in areas where trollers are? The trollers only use two types of lures: crank baits and bucktails and they can only make the lures go in a straight line. For that reason when I am fishing water that I know a lot of trolling boats go over, I almost never use bucktails or crankbaits, and instead go with lures that I can give a ton of action. In my opinion, there is no better lure for that then a bulldawg. A bulldawg is a Lake St. Clair casters dream simply because it allows you to impart so much action, all of which the trollers straight running lures cannot duplicate. I prefer to give my bulldawgs tons of stopping and starting, up-down and left- right action by doing a lot of hard rips with your rod in every direction. It seems in the summer it normally works best to be extremely aggressive with your bulldawgs in order to trigger these fish that have normally seen tons of baits going in a straight line. On the other hand, in early June and the fall, normally long slow pulls work better for the slightly slower metabolic rates of these colder water muskies.

Lake St. Clair musky casting is one of those techniques that truly has it all: tons of variety and options to fish as well as Giant Lake St. Clair casting muskies to be had. Make sure you come out and check out this amazing bite for yourself!